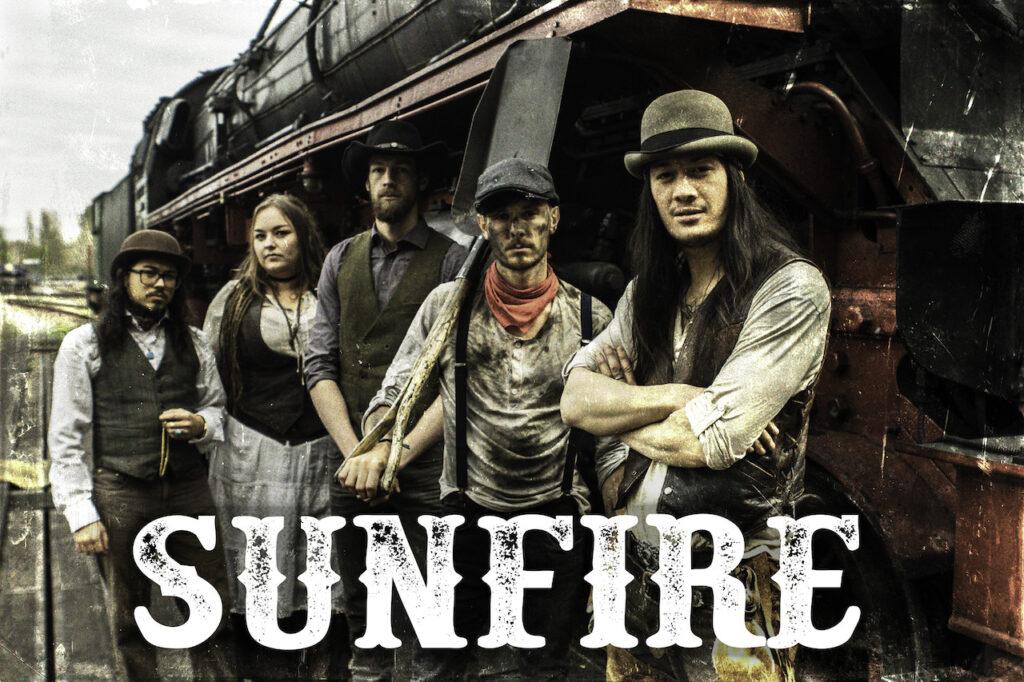 Their Western Folk is a blend of Folk, Roots Rock, Americana and Bluegrass cast in an unmistakable sound. Expect a surprisingly nice rock sound, raw edges, and irresistible rhythms and melodies during their performances. Partly because of this, Sunfire grew into a beloved and unique live act. During their many wanderings, the band has already visited several well-known pop venues and played at many festivals in Europe.

A Sunfire show guarantees an energetic experience with a lot of musical violence, in which an incidental waltz is not shunned. At a Sunfire performance, you'll feel like you're in an old western, so pull your hat out of the mothballs and grab your lasso! And with a little imagination you can hear Sunfire's cowhands galloping from afar.

The line-up of this outlaw band from The Hague is formed by lead singer Satria Karsono on banjo and guitar, violinist Sophie Zaaijer, Berend de Vries on electric guitar, drummer Jeroen van Leeuwen and Michel Beeckman on bass.

“Not once but twice, on Friday and again on Saturday, Sunfire was to be found on the Mystic-Stage. The funny five-piece made for a great atmosphere among the attendees. Honest, as the Wild West, is how one could best describe this group. Armed with a good mood and danceable rhythms, they played themselves straight into the hearts of the audience. Many people show up even more than once to the shows of these musicians. Not only finest Alternative-Western-Folk was presented here, but also an amusing and delightful show. Music Ghouls, Michaela Maurer, show at Autumn Moon Festival October 2019 (DE)

But before the next act at the Hofplaats starts, we move towards the Hofvijver to see the Hague based Sunfire start off the night. Arriving at the stage and hearing the initial sounds from the band, the first thought is: “What a cool act to have as the kick-off.”
On top of the western folk being so well done, the crowd is definitely into it. The crowd's clearly warmed up, everyone's clapping and dancing enthusiastically. To be fair, the infectious rhythm the band is putting out makes it really hard to keep your feet still. Towards the end of their set it's become clear the crowd hasn't had enough. The organizers have no choice but to let this five piece play some more. The last song is one big party, performer Paul van Vliet is moving his hips, and a crowd surfer is the cherry on top. What a great start to the night!  3voor12, Nikke Born, festival The Life I live 2019 (NL)

An energetic sound that works in an addicting way. Party animals will get an itch, unable to resist the legs start dancing, the dust rising from the dancefloor, hazing those present. Whoever doesn't get a kick out of this is brain dead. Folk Magazine 2019 (BE)

A wonderful – and wonderfully achieved – mix of bluegrass, folk, country and rock, which occasionally possesses a kind of centrifugal intensity. The quiet parts are also hard to spurn.The Netherlands' best kept secret? This second album by the quintet Sunfire showed up quietly, even though it blows the competition in any genre out of the water when it comes to originality and inventiveness. Rating: 5 stars out of 5 , Lust for Life 2019 (NL)

Sunfire is a band that are at the brink of an international break through. This CD is just as good as their live shows. So anyone who has seen Sunfire perform live and loved it, you can buy this album blind. You won't be disappointed. Cliff de Booij, CeltCast radio 2019 (NL)

The songs are loosely based around a Wild West theme and the hard times and sorrowful lives that inhabit the occupants of the mythical Sinner's Town. Throughout, there is an energy and vibrancy in the playing. Engaging and something here for every taste. Lonesome Highway 2019 (IE)