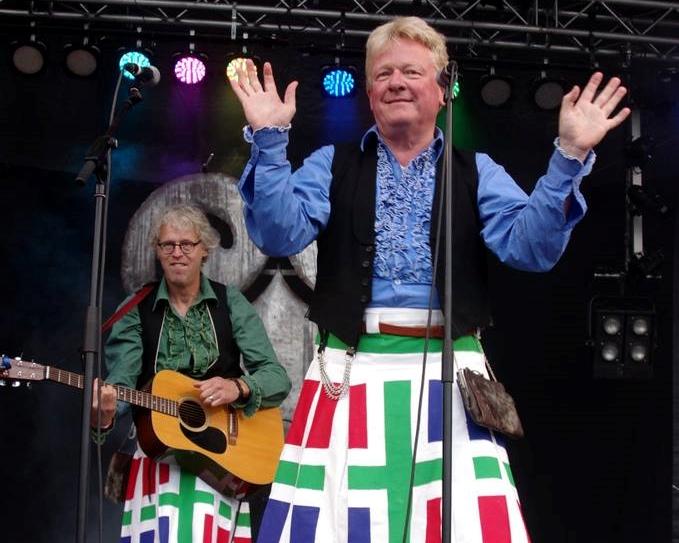 They're coming back! Groningen's most famous duo already rocked our festival in 2015 and will do so again in 2022!

This Groningen musical cabaret duo became known in the 1980s for street performances in the city of Groningen, during which they sang well-known songs with lyrics in Groningen and Dutch, accompanying themselves on an acoustic guitar. De Haan and Den Hollander were members of student association Albertus Magnus. After both, separately from each other, took part in an association song festival in 1978, they decided to continue together. In 1980 the same song contest was won with the song Gezina. Shortly afterwards they started performing on the street. They used the wide part of the Herestraat in Groningen for the Hema. Due to the large crowd, the street was often completely closed.

Legendary performances were on February 25, 1982 in De Trefkoel in Paddepoel, March 11, 1982 in Het Dok in Lewenborg, May 5, 1982 in the Noorderplantsoen and September 17, 1982 in Jeugdsoos Rehoboth (nowadays Zaal Flits) in Loppersum and the Oerol festival on Terschelling. . At bigger gigs they were assisted by a backing band called De Containers.

In 1985 the band disbanded. In 1988 they started with Alina Kiers with the trio De Bende van Baflo Bill, later followed by Voorheen de Bende. A farewell concert was held on November 16, 1984 in the Municipal Theater of Groningen. After this, in the spring of 1990, by popular demand, another reunion concert followed. In 1994 they gave two more concerts in the Groninger Evenementenhal, P&R Tien Jaar Uit Elkaar. The tickets for these performances were sold out in no time. De Haan and Den Hollander's 25th anniversary as an artist was celebrated with a short tour in September and October 2005. The two closing concerts in Martiniplaza were attended by two four thousand visitors. During this performance Daniël Lohues played along with Zundagoavond Blues.

In December 2005 Pé & Rinus became Groninger of the Year.

On January 14, 2008, Pé & Rinus sang along with the Grönnens Laid during the record attempt “Singing Folksong” on the Grote Markt in Groningen. In addition, they also played their instrumental version of the song and sang “Jelle (Gaat Lekker)”. On May 10, together with De Bond against Harries, Peter and Frank launched the old-school remix of the song De Plattelandsvrouwen as a joke – a jumpstyle version. On February 23, 2012, Pé & Rinus gave a concert in Martiniplaza, accompanied by the North Pole Orchestra. In 2015 they were the surprise for many at Zomerfolk and in 2016 they performed at the Zwarte Cross. Plus they just released a new CD!

Anyone who was at the performance of these amazing men in 2015 will surely remember this. We are therefore very proud that they will be there again in 2022!